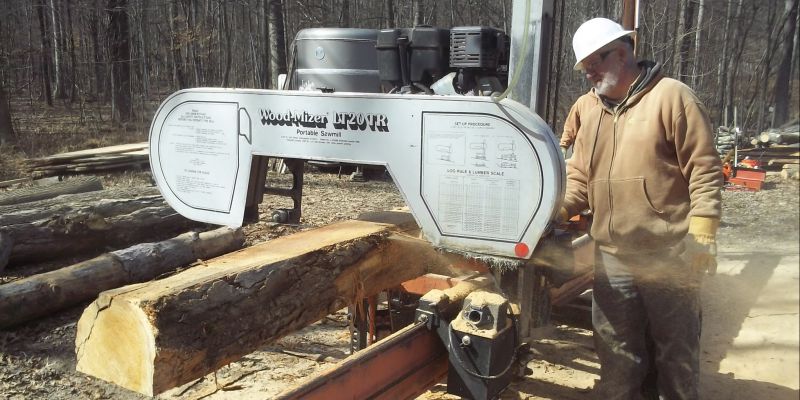 A Sawmill At Your Doorstep

The soft purr of the motor complemented the higher pitched whine of the saw as it sliced through the oak log. Brent Feldweg, the sawyer, operated the bandsaw set up at the end of my driveway next to the pile of logs. Brent operates Forest All, a consultant and saw milling firm in Hopewell Junction.

As winter drew to a close, I’d assembled 18 logs from dead pin and white oaks, white ash, and red pines, together with a few maples and oaks from blowdowns in the woods. Those few logs would hardly have interested a commercial logger, but they provided a good day’s work for Brent. Always in need of fence boards on the horse farm, I asked him to bring his sawmill—on wheels and easily moved—and to cut the trees into useful lumber.

In early March, Brent set up the portable mill, leveled it, and began to work. First, he’d pull a log up onto the carriage of the mill with a winch salvaged from an ATV. After positioning it, he clamped the log down to keep it steady and began slicing into it. Off came the rounded outer bark. It required one or two passes of the saw and produced numerous slabs, easily worked up into firewood later.

Once square, he could turn the log over and repeat the process, resulting in a square-sided log. Repeated passes then produced 1 x 6 boards, sixteen feet long—so useful on the farm. The boards looked great, clear and neat and remarkably smooth as a result of the use of a thin blade. His assistant, daughter Kaitlin, moved the fresh boards to a pile, neatly stacked to air dry until they could be added to the fences of our horse pastures. Air drying lumber can take a year or more outdoors, but since I planned to use most of the boards for fencing, just a month or two would help keep them from warping, shrinking, or twisting.

Brent provides many tree services to property owners, and I was very pleased. His very long day’s work cost about $800; well worth it to me, considering it produced a large number of boards. I also realized a small quantity of sawdust for the blueberries and fruit trees, a few very nice shorter slices that may make some rustic tables (“project wood,” Brent called them), and lots of firewood logs.

In spite of the high concentration of farms in Gardiner, on-site sawmill services are a great resource that few people know about. A number of them can be found in the Hudson Valley.