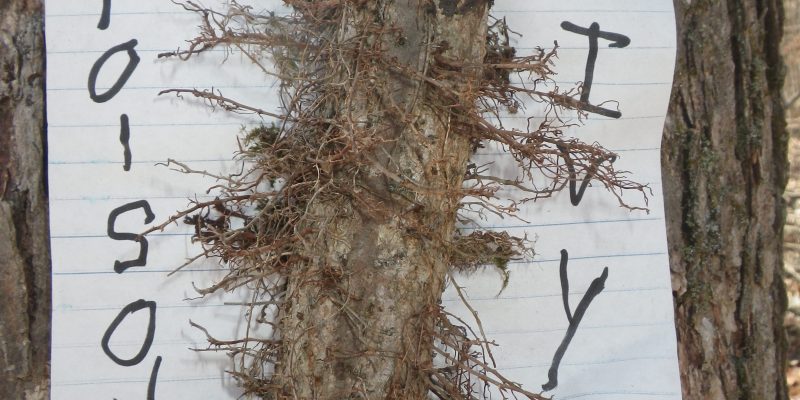 This old ditty sums up most people’s reaction to poison ivy: get away and leave it alone. Of all the scourges in the Hudson Valley, this noxious plant surely ranks as the worst. It particularly likes growing throughout the town of Gardiner. People susceptible to the oily secretions (urushiol) react in several ways, from an annoying itch, to blisters and extensive skin irritation. It is not a desirable plant for a homestead. Pets can carry the oil on their fur, and people can be exposed by petting or grooming them.

When we moved to Gardiner over 26 years ago, my spouse took a look around the place and said, “This poison ivy has got to go.” She is highly allergic to it, and wanted nothing to do with the outdoors until it was eradicated. I noticed thick poison ivy vines growing up many of the pin oaks in and around our place. Some of the vines were an inch or more thick, and had been there for many years. Worse, their progeny was scattered all over, beneath those trees and elsewhere on the land. You can see much the same condition on many trees along the Rail Trail.

Early on, I worked with a large lopper to sever every poison ivy vine I could find growing up the trees nearby. But that was not enough–numerous small and not so small seedling poison ivy vines dotted the landscape, each requiring hand pulling, or spraying.

Hand pulling is highly effective, but must be done while well protected. Many a gardener is surprised after a session weeding the flower or vegetable plot to break out in itchy rashes on one or both hands and arms, from small poison ivy vines hidden among the desirable plants. You will need a long sleeved shirt, long gloves, preferably waterproof, long pants, boots, and much patience when pulling poison ivy.

Care is needed in removing the gloves and clothing, too, which should go directly into the washer, without touching any bare skin. Tools should be cleaned with alcohol if bare skin might come in contact with them later.

In spring, poison ivy is easy to identify: first noticed are the three leaflets, which appear with a shiny, reddish tint, quite distinctive. Summer, the three leaves are green, sometimes with a glossy tint.

It’s not unusual to start to pull up a vine, and then follow it for feet, or even yards, as it winds and twists through the undergrowth. But much satisfaction is realized when it’s finally all out and dropped into a bucket.

Whatever you do, do not burn it, or even compost it. Instead, throw it in a plastic bag and into the trash, or somewhere remote on the property. The smoke can carry droplets of the oil, and get into your throat or lungs, or on your skin.

If you are very allergic to poison ivy, hand pulling is not something you should do. Leave it to the experts–several garden firms will work to control it–or resort to spraying. My preferred method of eradication is the herbicide glyphosate (Roundup). Every spring, around the end of May, I mix up a batch in a gallon sprayer, and patrol the land. Anytime I spot those leaflets-three, I give them a good dose. Using the wand keeps my skin away from the plant, and insures good coverage. Note that this herbicide is toxic to all plants, so careful application is necessary. But I am willing to take a loss of a few nice plants to clear my gardens of this scourge. I successfully rid a patch of myrtle of poison ivy, where I could not hand pull it because it was so intertwined with the myrtle, but did lose some myrtle in the spraying process.

If you prefer a natural treatment, a vinegar-salt mixture is reported to provide some success. Recipe: add one cup of salt to one gallon of vinegar. Heat if necessary to dissolve the salt. Add eight drops of liquid detergent (aids in spreading the mixture on the leaves). Use a sprayer, or pour onto the poison ivy plant. Note: this mixture is also toxic to all plants, and will kill desirable ones as well as poison ivy.

If you notice poison ivy near where boiling water is available, that will kill the plant–and, again, anything else it touches.

Later in the summer, if my spouse spots fresh seedlings, or notices resprouting from roots or vines, I’ll get the sprayer out again, and deal with the new ones.

Where do all these noxious seedlings come from anyway? Birds are not affected by the oil.  They munch and then drop the seeds all over the place. New vines often appear at the base of fence posts, thanks to birds, but may occur anywhere.

Each year, you may expect avian delivery of poison ivy seeds, so ever-vigilance is the watchword.